The Southern  Festival 2013 was officially opened  on June 1 at Suoi Tien cultural tourism site in Ho Chi Minh city. This is an annual festival co-hosted by the HCM city Department of Culture, Sport  and Tourism, the HCM city Department of  Agriculture and Rural Development and Suoi Tien cultural tourism corporation. It aims at promoting tourism of the city as well as boosting the fruit’s production & trade for Vietnamese farmers. 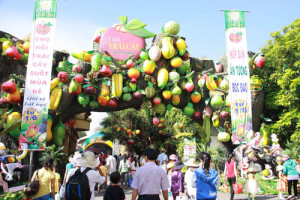 This year, the festival featured over 180 kinds of fruit from 21 provinces all around the country. These fruits were sold on the floating boats, which is a cultural feature of  the Southern Vietnam. In particular, this floating market will be held during three months of summer, selling fruits at 20 – 40% lower prices than market prices.

In addition,there was a colourful parade of fruits, featuring  art performances from foreign countries including South Korean, Thailand, Malaisia, Laos and Indonesia.

An unique activity of the festival this year was the Fruit Artworks Competition. The most talented artists across the country gathered here to create beautiful works of art from fruits. Some of them simulated famous places such as Ben Thanh Market or Reunification Palace. Others simulated the images of  important person such as President Ho Chi Minh. 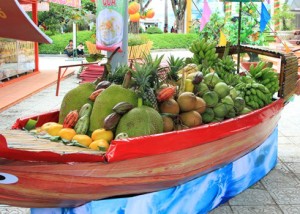 There were lots of  other interesting activities including Safe and Delicious Fruit Contest, the exhibition of more than 300 kinds of exotic fruit, the presentation of foods and drinks made with fruits together with other culture and sport activities. This festival is a very popular tourism activity, attracting a great number of domestic and foreign tourists to HCM city.